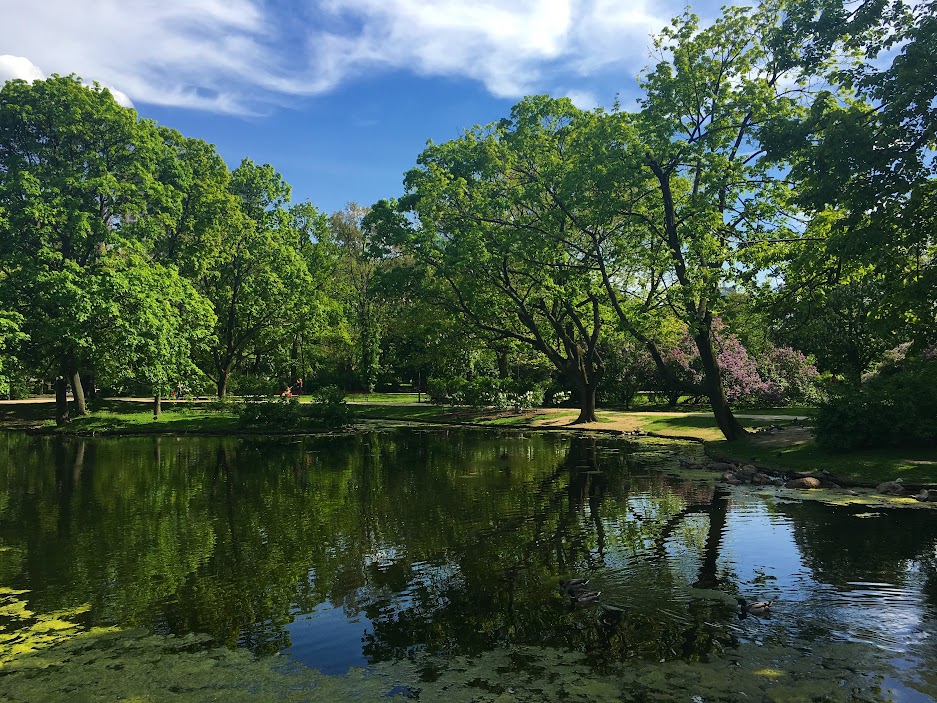 a park in Warsaw

Poland is beautiful. Its cities are clean; the public transit is efficient. The landscape is rolling, filled with yellow fields and green, green grass. There is an abundance of parks, one of which we visited while on a tour of the Warsaw Ghetto in Warsaw.

The park was expensive, at the base of a beautiful Renaissance palace that now houses a branch of the National Public Library of Poland. It had a beautiful pond, walking paths, a playground, and open, grassy fields where young adults and the elderly were enjoying the beautiful May afternoon.

The park reminded me of Piedmont Park in Atlanta. However, there were a few differences between the parks in America and the parks in Poland that I noticed.

In Poland, the grass is not as well-kept as the grass in Poland. Dandelions and weeds dot the landscape, and the lawns are patchy in areas and are not mowed as often as parks in America. While it was less aesthetically pleasing, I imagine that it is much better for the environment. Additionally, many of the paths in the parks were not paved but instead are packed dirt and rocks. Maybe this is because the parks are older, but it was a new feeling, to walk through a park on dirt instead of asphalt. It was also a new sound, to hear bicycles and strollers roll along the dirt, and crunch instead of glide smoothly.

Another feature of the streets of Poland is graffiti. At first, I thought there seemed to be a lot of graffiti, and I know some of the other girls on the trip thought the same. However, I realized that the two places we stayed the longest, Warsaw and Krakow, were major metropolitan areas, and graffiti is prominent in major metropolitan areas all over the world. Once I reminded myself of that fact, the graffiti in Krakow or Warsaw didn’t seem so different from the graffiti in the Krog Street Tunnel.

Another thing that I loved about the public spaces of Poland was the street music. Everywhere we were, talented musicians were taking advantage of the echoing archways and wide-open plazas filled with crowds. One of my favorite memories was an evening in Krakow on my own after I had dinner with some family in the Market Square. In front of  St. Anne’s Church, a cellist played hauntingly. I sat and listened to him for as long as I could. I know we got into a bit of… trouble… with street artists in Gdansk, but it was one of my favorite parts of the trip.

On the plane ride from Atlanta to Paris, I found myself looking forward to European parks– they’re places where people generally know to be fairly quiet and mind their own business, especially outside of larger cities, which is an attitude I can appreciate. I was not disappointed with Poland’s parks, and I loved that the two halves of their populations seemed to be children on scooters and old men with cigars. I know that the generally European lack of public utilities (like water fountains and free bathrooms) disappointed some people, but I liked seeing that parks in Polish cities seemed to be part of people’s daily commutes and lives. As a suburbanite child, I used to have to make elaborate plans with my friends to go to the park; in Poland, parks seem more like checkpoints than they do like destinations. They’re not necessarily over-the-top with the decorations and play equipment like a lot of them are in the United States, but they’re well-maintained and good places to take a break. One of the main areas of Warsaw’s Old Town

I was also curious to see attitudes on the street, in restaurants, and on public transportation in Poland, especially in comparison to France (and I know public transportation is a whole other topic, but I kind of consider the subway or bus to be a public space). In general, conversations seem to be louder on transportation (although not American volume) and people seem to be more inclined to speak to strangers than they are in France, especially Paris, where everyone ignores everyone else unless they do something spectacular. Restaurants– an integral part of so many public spaces in Poland– seem pretty similar to those in the United States, but maybe that’s because we were usually in the tourist centers of the Old Town wherever we were visiting. It was the street behavior that was the most interesting to me, though; a few people pointed out the graffiti, but in general, Polish people appear to take extremely good care of their streets, even in areas that in the United States we would consider the grimy downtown. People looked for (and used!) trash cans, and public squares (especially in Krakow) were certainly busy, crowded, and old, but also well taken care of. I liked walking around a square in Krakow after dinner one night, watching the enormous flea market pack up after a long day– the vendors took not only their items for sale but also any trash they found on the ground. Of course, the pigeons probably helped to get rid of trash and food waste, too.