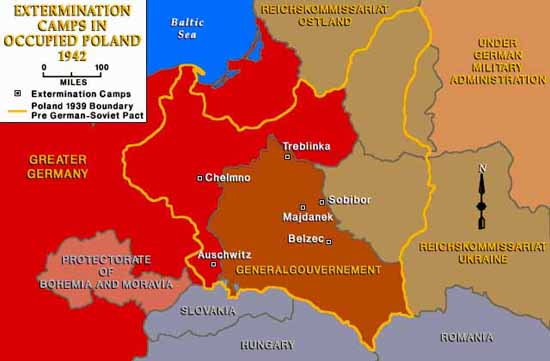 The Nazis established killing centers for efficient mass murder as means of their “Final Solution.” Unlike concentration camps, which served primarily as detention and labor centers, killing centers were almost exclusively “death factories” designed to carry out genocide. Between 1941 and 1945, the German Nazis established six extermination camps in German-occupied Polish territory——Chelmno, Belzec, Sobibór, Treblinka, Auschwitz-Birkenau, and Majdanek. Both Auschwitz-Birkenau and Majdanek functioned as concentration and forced-labor camps as well as killing centers. German SS and police murdered nearly 3.5 million Jews in the killing centers either by asphyxiation with poison gas or by shooting. Other victims included Soviet prisoners of war and Gypsies.

Chelmno, opened in December 1941, was the first killing center the Germans created to kill Jews. They built three more in parts of Poland conquered from the Soviet Union: Belzec, Treblinka, and Sobibór. Those camps were at the heart of Operation Reinhard—the code name for a plan to murder all the Jews in Poland. The operation began in earnest in 1942 and ended in 1943. During those two years, 1.7 million Jews were removed from ghettos in Poland and taken to gas chambers. Only a few people are known to have survived Belzec and Chelmno. Fewer than 70 lived through Treblinka, and about the same number survived Sobibór before the four camps were closed in 1943.

Auschwitz was the largest camp established by the Nazi. It was a complex of camps near the Polish town of Oswiecim. It included three main camps: Auschwitz I, Auschwitz II (also called Auschwitz-Birkenau), and Auschwitz III (also called Auschwitz-Monowitz). Construction of Auschwitz II (October 1941) began a year and a half after the building of Auschwitz I. It was built three kilometers away from Auschwitz I. After a year, they started building Auschwitz III (October 1942). Auschwitz-Birkenau had the largest prisoner population. Auschwitz was fitted with the first five permanent gas chambers at Birkenau, beginning in March 1942, and from June 1943, with the construction of four additional large gassing-rooms. The extermination of Jews with Zyklon B as the killing agent began in July 1942 with the “selection process”. By early 1943, Birkenau became a killing factory, with four crematoria working around the clock. At the height of the deportations, up to six-thousand people were gassed and cremated there each day. Auschwitz-Birkenau gas chambers and crematoria were blown up on November 25, 1944, for the purpose of destroying the evidence of mass killings, by the orders of SS chief Heinrich Himmler. Over a million Jews and tens of thousands of Roma, Poles, and Soviet prisoners of war were killed there by November 1944. 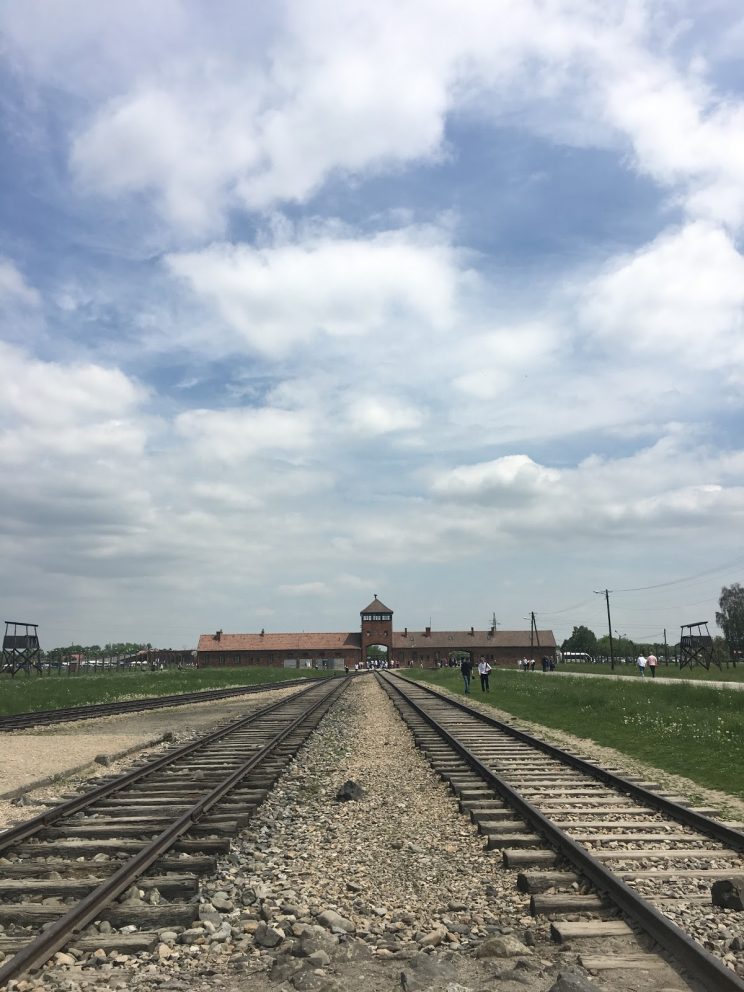 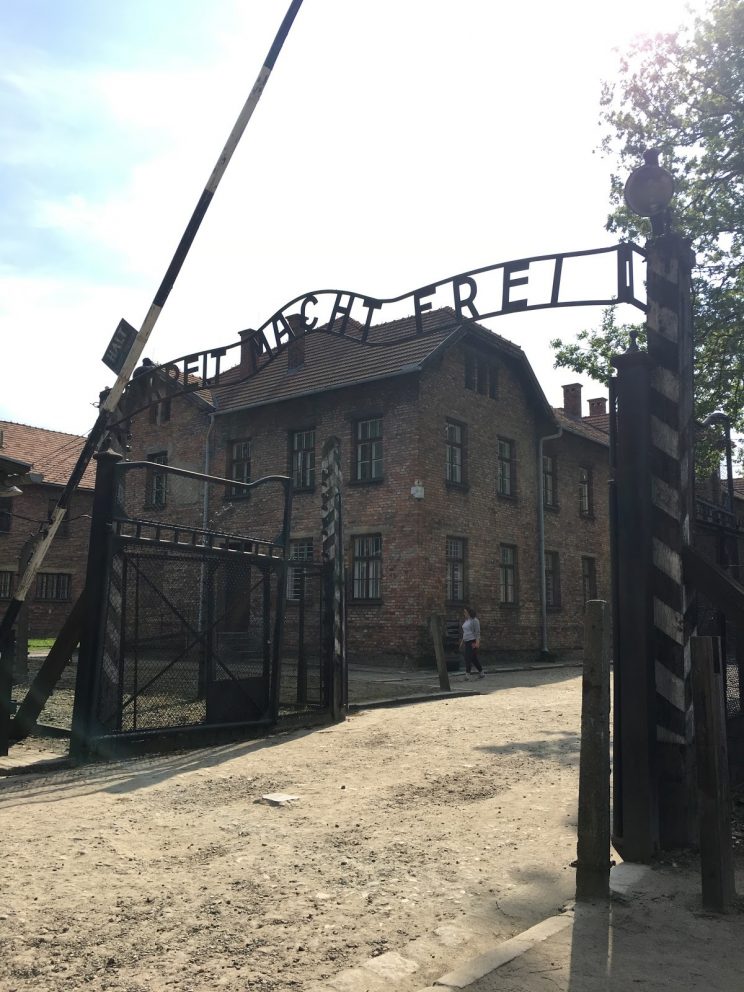 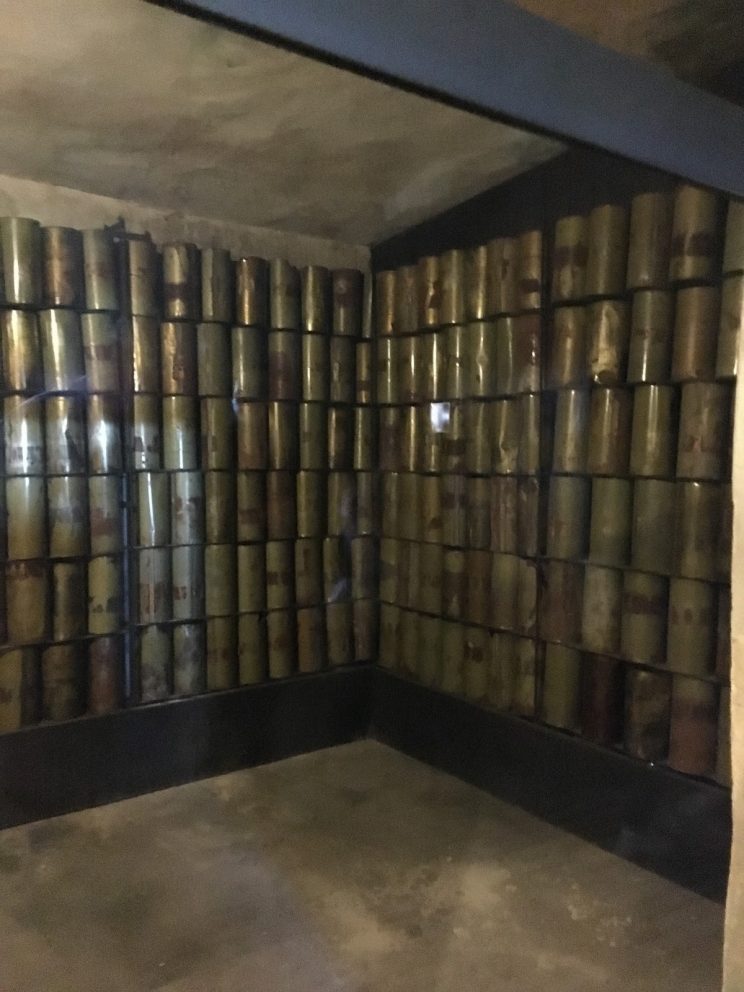 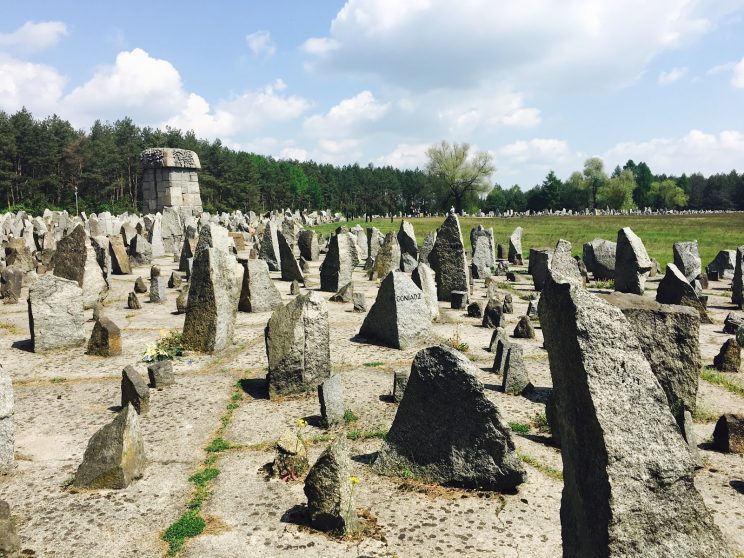 The Majdanek forced labor camp, located on the outskirts of Lublin, was closed during typhus epidemic and reopened in March 1942 for Operation Reinhard. Within the framework of Operation Reinhard, Majdanek primarily served to concentrate Jews whom the Germans spared temporarily for forced labor. It occasionally functioned as a killing site to murder victims who could not be killed at the Operation Reinhard killing centers: Belzec, Sobibor, and Treblinka II. It also contained a storage depot for property and valuables taken from the Jewish victims at the killing centers. By the end of Operation Harvest Festival in early November 1943, Majdanek had only 71 Jews left. 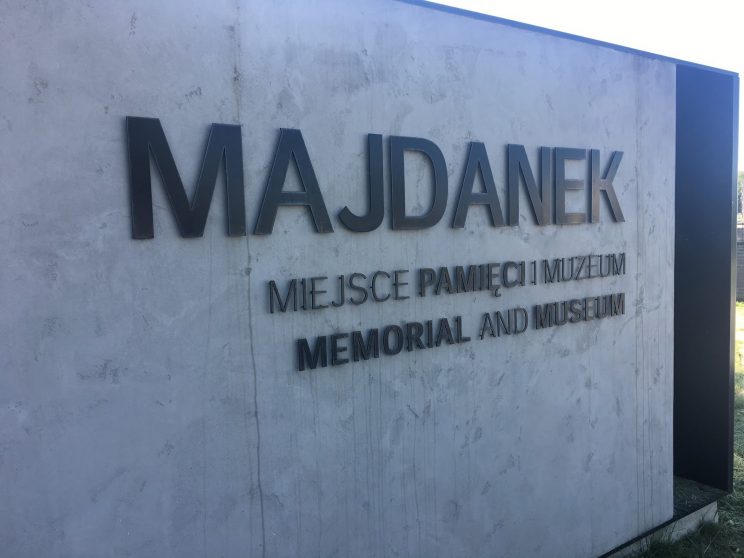 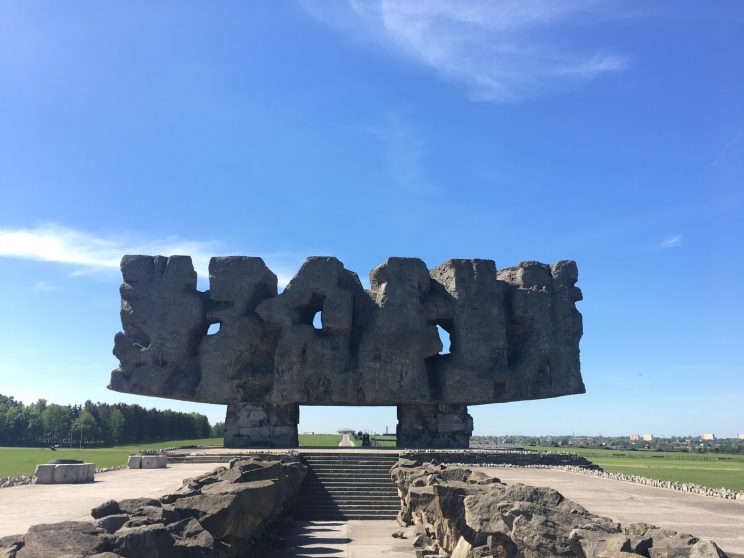 During our stay in Poland, we visited several killings sites. Some of the killing centers we saw were Treblinka, Majdanek, Stutthof, and Auschwitz. Most of these sites were not constructed for extermination only and they had other functions such as forced labor. However, they are death camps because they resulted in the slaughter of millions of victims such Jews, Roma, and Soviet prisoners of war. As I reflect on my visit to these places, I remember the way each camp represents its victims, historical background, geographic location, and number of survivors. They all have unique perspective and different ways of representing what happened there. Most of them were destroyed by the Nazi and the original buildings are not there. However, places like Auschwitz, Majdanek, and Stutthof still have original barracks and collections of personal items that belonged to the victims such as toothbrushes, suitcases, and shoes. Even though most of them have no personal information, the fact that they are there indicates they belonged to victims who were murdered by the German Nazi. These items are hard evidence of what happened to people.

Treblinka was the first death camp we visited. It is in an isolated location because the Nazi were very strategic in covering up what had happened, making it difficult for anyone to accurately witness what took place. Before we visited Treblinka, I thought I knew enough about the site and was prepared for the power message the monument and the stones conveyed. I did not think I was going to be phased as much as I was when I got there. The first thing that struck me was how peaceful and eerily calm the area felt. The land is green and there are trees everywhere. I was definitaley not expecting the scenery I saw there when I was walked to the monument. It was a stark contrast to what I thought a killing site will be like.

Furthermore, the monument and the stones were striking to see in person. As we explored the area, I learned each of the 17,000 stones bears the name of a city, town, or village from where victims were sent to their deaths at Treblinka. On the site near where the gas chambers used to be is the large stone monument and it is surrounded by the 17,000 symbolic stones. There was also a “Burning Pit” which represents the location of where victims’ bodies were burned. Treblinka’s memorial is definitely one of the most powerful and interesting ones.

Another site we visited was Majdanek. It is largely intact and I was amazed to see how close it was to the city. In fact, we took a public bus there, which was bizarre enough because we were literally taking the bus to a place where victims were tortured and killed. The huge monument: Fight and Martyrdom could be seen from a distance as the bus neared the camp. It is a vast camp and most of the barracks and gas chambers are still intact. It is the point where most prisoners would have entered the concentration camp. The first thing our guide, Agnieshka asked was our own interpretation of the monument. I remember looking at it and seeing six figures. I automatically thought it must represent the six millions Jews that were killed. Our guide  explained everyone has their own representation of the figures and what they see when they gaze at it. In my case, I saw numbers and immediately thought about the victims.

The hardest the camp for me to visit was definitely Stutthof. Even though weeks has passed since we visited there, I still cannot think about it without breaking down. It was one of the last spots we visited in Poland and I think I was emotionally drained on that day because right after we watched the short clip that was played in the theater, I could not control myself. I had an emotional break down. I tried to walk around and take my mind off of what we just saw, but the first building I entered was where all the shoes the victims left behind was kept and from there I just could not see the rest of the camp. I remember walking to the main entrance and staying there until we were ready to go. I regret not seeing the rest of the camp; however, in that moment I know I was not able to do so. Part of me is definitely ashamed of not paying homage to the victims and learning more about what happened in that camp. 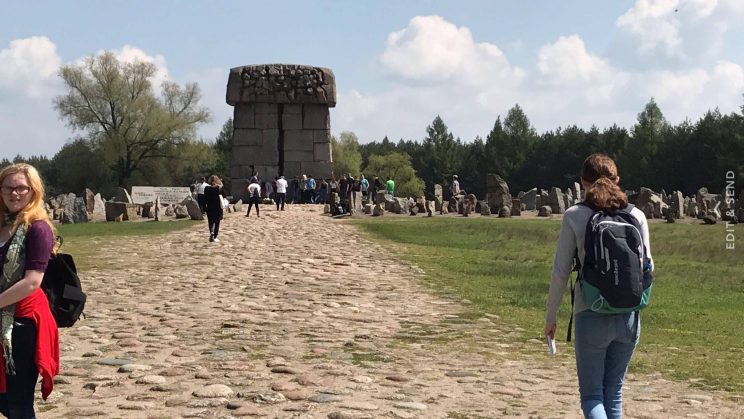 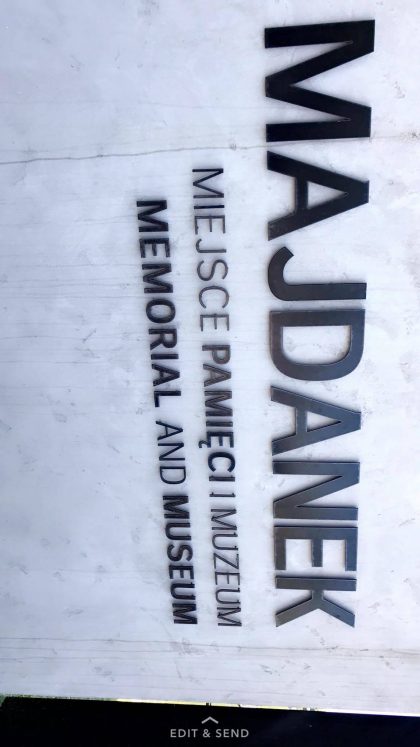 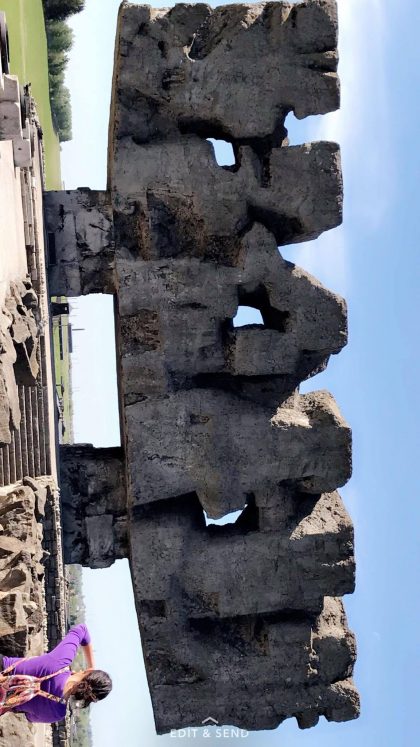 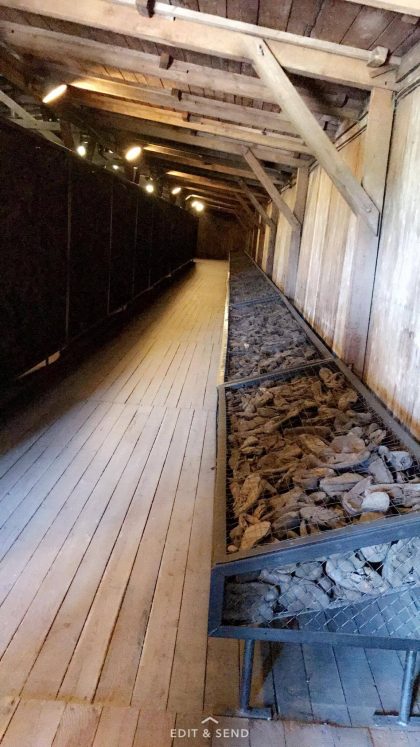 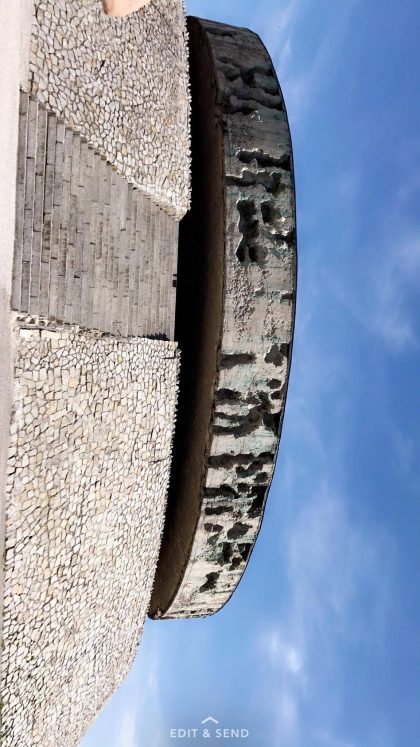 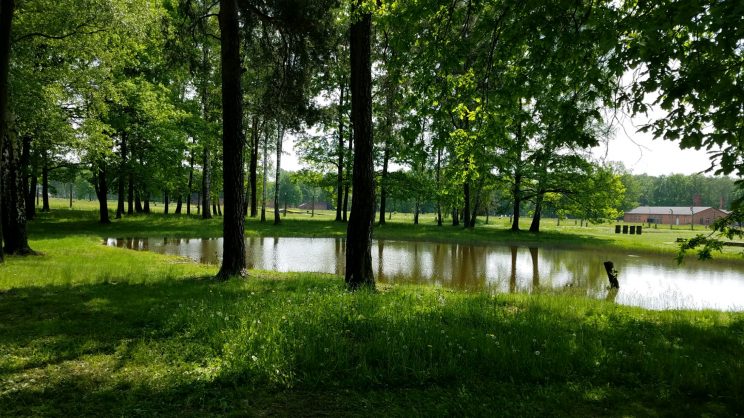 There were 2 distinctly different kinds of killing sites that we visited in Poland: those that were known and those that were hidden. The very first death site we visited was Majdanek. I really expected this to be a perfunctory visit. We knew of Majdanek as primarily being a storage place for the masses of artifacts left behind by the victims of the Reinhardt camps. Yet once we were there the reality of the camp was instantly overwhelming. Every single article and building stabbed into my heart; I was blown away by the power of this camp. From the moment I stepped through the monument of Majdanek I carried a queasy, heavy feeling within me.

Time and time again we saw fields where man killed man. In many of these locations nature had overcome all evil to reconquer the area and fill it with beauty and peace. This was a very hard thing to come to terms with. We expect there to be massive, unshakable monuments at every place of human suffering but as we learned in Poland, this is impossible. Human beings are capable of such atrocities and such love that it is excruciating trying to reconcile the two. When we would view each killing site we were confronted with this fact. The smell of wood, the color blue, and the imagined pain that was contained within these fields, gas chambers, and barracks are more than enough to make a person doubt the capability of man. It was difficult to face these bare and empty buildings and try to not feel the immense suffering and desolation that had once been held captive here.

Everywhere that people were murdered en masse was a site of both extreme hatred and love. I thought often of what Henry Friedman described about the postcard from his mother and sister– the subtle message of familial love comforting a person even in the face of death. The love and terror that was held within these sites has been preserved better than the hatred that led to their destruction, I hope.

It was a real gift to be able to view these sites with respect and profound sorrow. We were able to visit concentration camps, ghettos, and last stands that showed the depth to which human nature was tested during the Holocaust. It was very hard to see how beautiful some of these locations have become. Nature has reclaimed many killing sites and I was, and still am, uneasy about putting into words how that made me feel. It is such an inevitable thing, for nature to reduce human events to insignificance, yet at times I was able to draw comfort from the fact that perhaps people too could wipe clean such a dirty history and remember the past without repeating it. 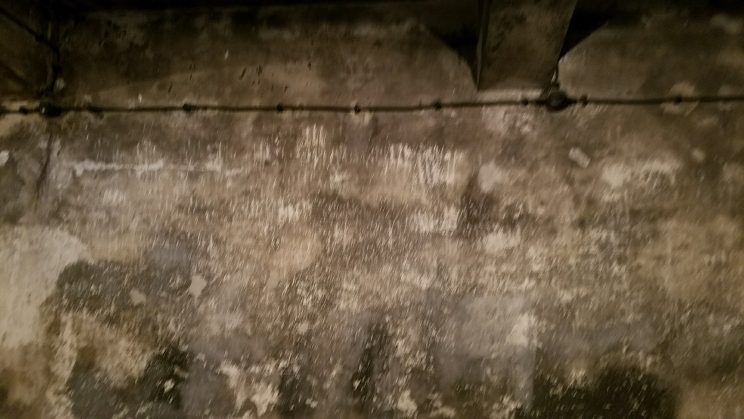 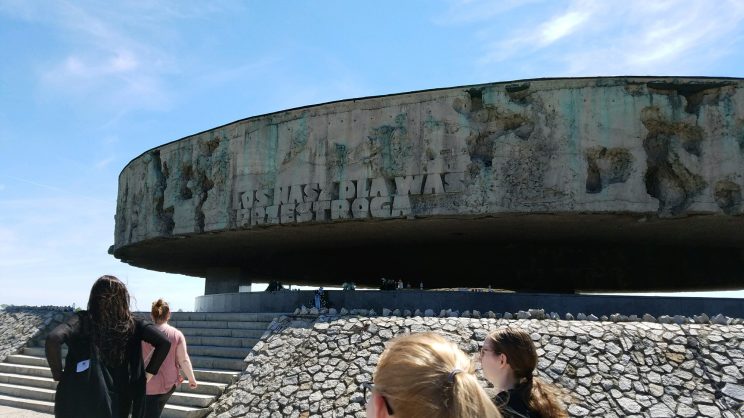