In labor and extermination camps, “prisoners” were housed in barracks. These were usually long wooden buildings. In Majdanek and Stutthof the barracks did not have any heating or cooling systems other than the small windows placed at the top. However, we were informed that a prisoner may be punished or killed if they touched the windows to open or close them.  In Auschwtiz II Birkenau the housing barracks held stoves that could be used as a heating system but they were hardly used. It was like a cruel trick that the Nazis placed them in these living barracks only for show. In Auschwitz I, the barracks were actually large brick buildings. This is because it was built by Soviet Prisoners to be Polish Army barracks. For the first few months that they were used as prisoner barracks, the “prisoners” had no blankets or beds. This was the case in other camps as well. However, soon camps created large three-story bunks for the “prisoners” on which to sleep. These bunks were simply made of wood, with no mattresses or even blankets for the “prisoners” comfort. In some camps, when there was over crowding these sleeping barracks would have over 700 prisoners. This would cause miserable conditions in the heat of the summers. Over-crowding would also cause an increase in diseases and sicknesses. These were appalling living conditions. The Nazis just didn’t care if their “prisoners” were comfortable or not, to them it was simply holding farm animals. Seeing these barracks where people were supposed to live  was sickening.

Barracks were also used for many other reasons. In Auschwitz II Birkenau we visited a barrack that was used as a lavatory. It was the same size as all of the other barracks but it held cement blocks with around 200 holes on the top of these cement blocks. We were told by our guide that the prisoners had very little time in the morning and evening to use this lavatory. There was no privacy at all and “prisoners” would sometimes have sicknesses and diarrhea. However, if they stayed too long they would be punished.  Seeing this building was more emotional for me than I had expected. It just showed how the Nazis wanted to humiliate every “prisoner.”  They treated these people like animals and took away their sense of identity. They were not seen as humans, just animals that could be used for the Nazis gain.  We were also told that working in these lavatories was one of the best jobs a prisoner could have because it was inside. It is horrifying that people wanted to work in those conditions. It is just another example of how these camps and the Nazis just tortured and took away all humility of these people.

Nazis also used barracks for their work, or kitchens and eating areas. In Auschwitz I we saw the barrack that Dr. Mengele performed an experiment on 1,000 women to see if formaldehyde would cause sterilization. He did other awful experiments in this barrack as well. In the barrack next to this, in the basement there was the prison cells. They were small and dark. Everything down there screamed “these are animals not people.” Other barracks were used for work and other tasks.

Barracks were also used for gassing and cremations. I cannot comprehend why these gassings and cremations took place. They were used for mass murders. Being in these buildings was one of the most difficult things I’ve ever experienced. It was hard to breathe. It is still hard for me to comprehend the scale of what happened in these buildings. In the gas chambers, the ceilings and walls were stained blue from the Zyklon B. Blue used to be my favorite color.

Although these barracks were used for housing, kitchens, work, etc., they were gruesome. They all had a distinct smell that I will never forget. Entering these buildings caused feelings of dread, heartache, and grief. It was like you could see these “prisoners” and how miserable being in these camps was. It is hard to believe that buildings can be so cruel and cause so many negative emotions. After all they are just buildings. But these buildings hold horror stories and crimes that should have never been committed.

Please note that I use quotation marks around the word “prisoners” because a prisoner is someone who committed a crime. These people forced to be in the camps did not commit crimes. I don’t believe they were prisoners, they were just people who had to live through the most horrible things imaginable. 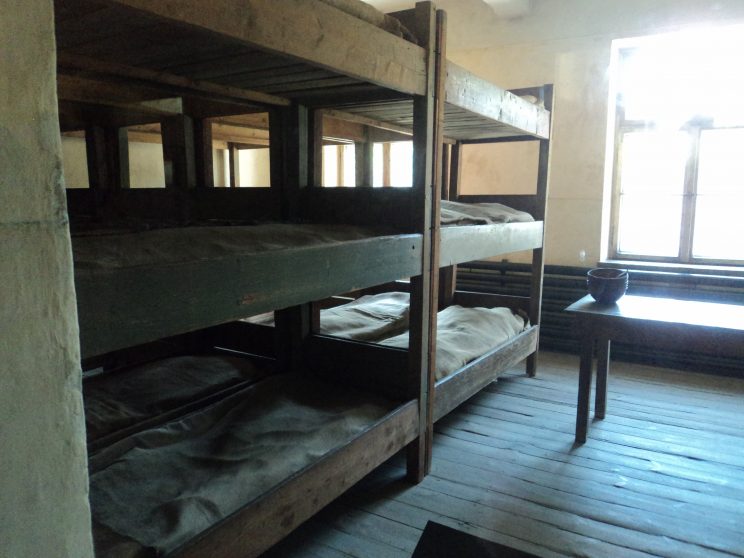 Examples of bunks in the barracks. Sometimes 8 people would have to sleep on one level. 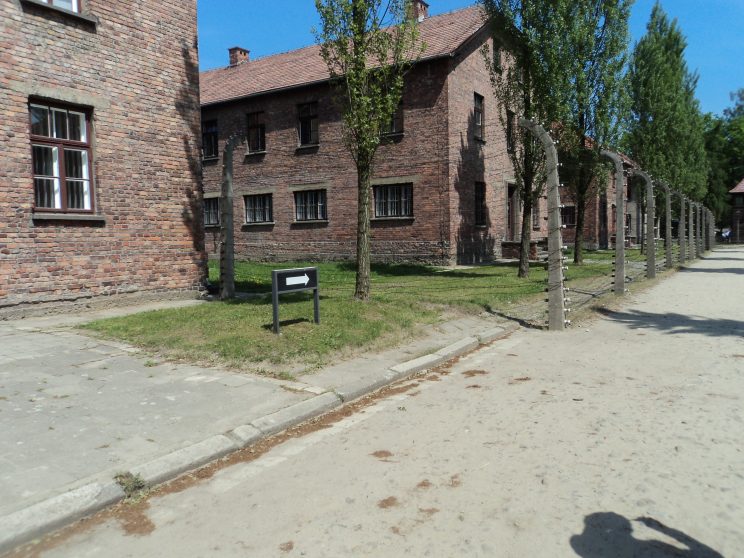 Barracks in Auschwitz I camp 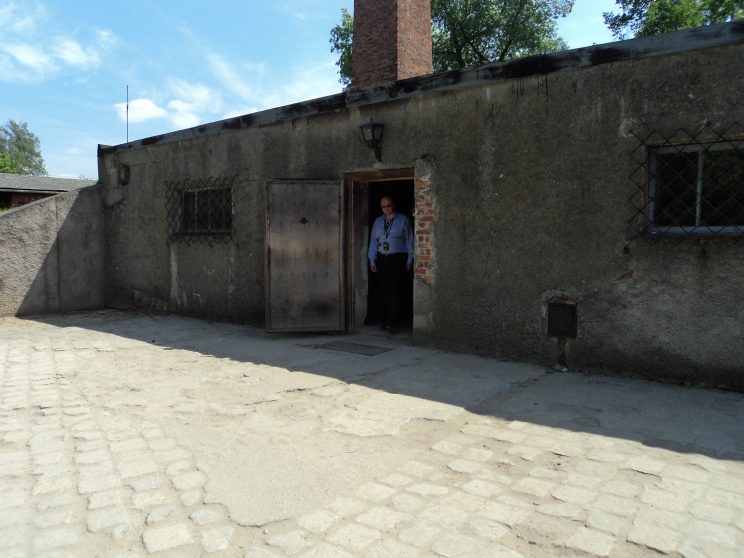 Barrack used for gassing and cremations. 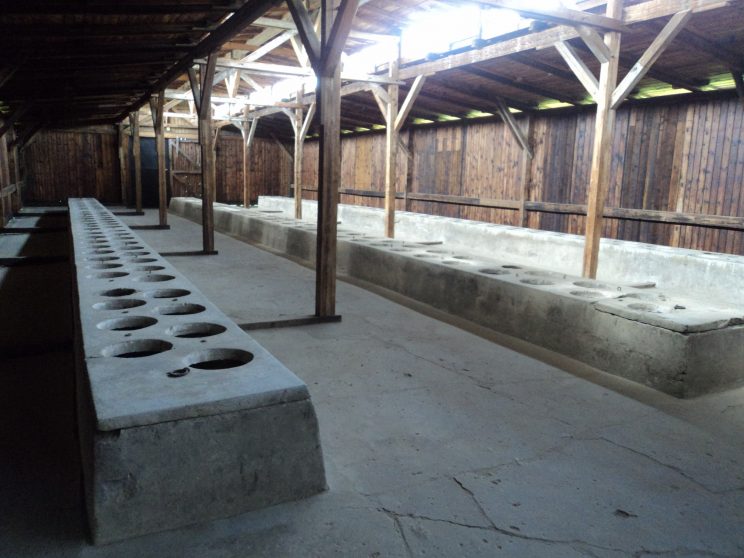 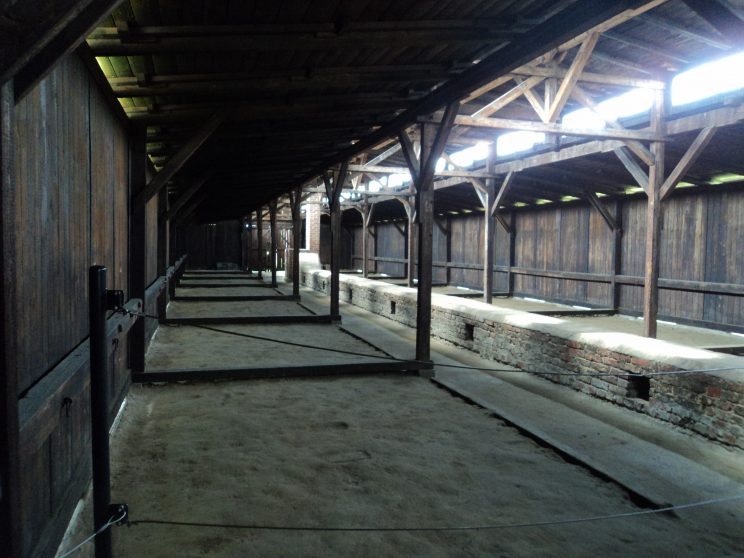 Example of barrack in Auschwitz II Birkenau in men’s prison

For those who made it to the concentration camps and were selected to live, the barracks became their new living quarters. Conditions in the barracks were miserable regardless of which camp they were found in. Tadeusz Kosibowicz, a Slovak Jew imprisoned at Majdanek near Lublin, described the barracks as “cold and wet, made of bare planks.” He also stated that the barracks were the territory of disease; typhus, scabies, lice, and a number of others spread rapidly in the barracks. A priest held at Stutthof near Gdansk reported that each prisoner had only 48 centimeters of space, or approximately 18 inches. He added that they were told not to complain as other camps only offered 30 centimeters—less than a foot—of space to each prisoner.

Additionally, the barracks offered little to no protection from the elements. Many barracks were only wooden structures without insulation, which exposed prisoners to harsh winters and sweltering summers. There was usually no electricity. Some barracks, like those at Majdanek and Stutthof, had no system for heating or cooling the buildings. Others, like those at Auschwitz-Birkenau, would have a method for heating the barracks, but it was rarely used. Barracks did have windows to allow some light in, though they did not open, and any attempts to do so could result in severe punishment. On the rare occasion the barrack ovens were used, they still operated inefficiently and failed to disperse heat throughout building. Often, if prisoners were placed in newly constructed barracks, they would find buildings without floors or bunks, leaving them with no choice but to stand or sit in mud.

Crammed into a single barrack were hundreds of people, sometimes only from Poland, sometimes from across Europe. Prisoners slept in tight quarters, using three-tier bunks that stretched on endlessly from the front to the back of the barracks. The photo below shows how one of the barracks at Majdanek was arranged. 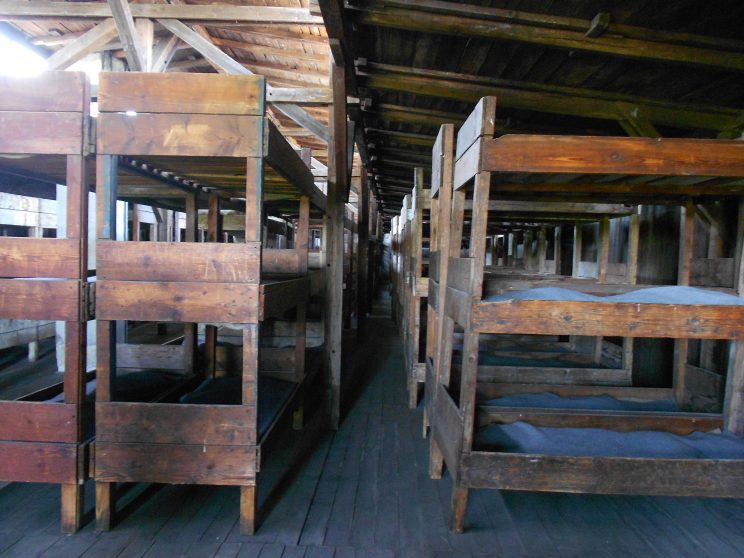 Bunks were shoved close to one another in a claustrophobic space. Beds came with thin mattresses and blankets regardless of the weather. Prisoners had minimal space to move in, and privacy was non-existent.

Barracks also came with a hierarchy system constructed by the Nazis. In many camps, Jewish and non-Jewish prisoners were placed in separate barracks. At some camps, such as Majdanek and Auschwitz-Birkenau, Jews were even placed in a section segregated from all other prisoners. To add to the miserable living conditions, barracks were headed by kapos—prisoners handpicked by the Nazi guards to rule over each barrack. Kapos were often cruel and quick to react; brutality against the prisoners under their watch was common.

The Holocaust and the concentration camps have a notorious (and well-deserved) reputation for killing victims en masse on arrival. However, this often causes the conditions experienced in the living quarters to be less examined. While the gas chambers and firing squads brought on the deaths of millions, it should be noted that the barracks of the camps had their own fair share of victims.